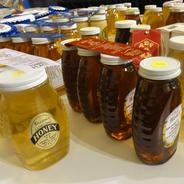 Honey bees are a valuable asset. A beekeeper would be able to give them a good home. It's estimated that swarms in the wild have a 50/50 chance of survival through the next season.  Us the list (above) to locate a beekeeper in your area (by county) or ​email: beekeepers@NEKBA.org​. We'll try to respond right away.

As a public service most beekeepers would like them, free of charge, would be more than happy to remove or pick-up your unwelcomed honey bee swarm!  Use the directory to email or contact by phone. This list is comprised of association beekeepers who have agreed to be listed in our directory and expressed an interest in being contacted for swarm pickup.  Thank you for your interest!

Colonies that swarm usually lose the capability of making a larger honey harvest for the beekeeper unless they swarm in early April or May. Therefore, the proverb above usually has some meaning to the beekeeper.

However, there is really an added benefit to the bees in the act of swarming that many do not think about as swarming is an inherited characteristic and necessary for the renewal of the queen, for the preservation of the species, and for the renewal of honeycomb construction in new honeybee colonies. 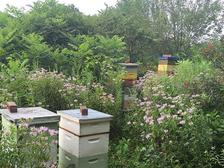 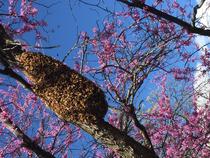 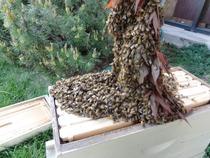 Contact an association beekeeper to help a swarm find a good home.

Before leaving the original colony, honey bees gorge on honey for the journey to move to a new home. They are generally not very defensive but can be enticed to sting. Call a beekeeper to come and retrieve it.

Do NOT spray with poisons or try to kill the bees.

Swarms are only in a temporary resting place until they rest enough to move on to their final destination. This activity is a common occurrence in April and May. People find them in their yards or around their homes. Beekeepers will not come to retrieve, if the swarm has been sprayed.

Swarms can be harmed by high winds, hail, and heavy rains as well as cold, freezing weather. A beekeeper will give them care and a good home. 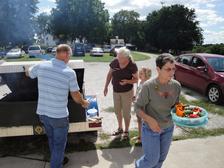 As a disclaimer, the association cannot assume responsibility related to the swarm collection or extraction activity, and the association shall be held harmless for any actions or activities related to any honey bee collection, including but not limited to information used, liabilities, or resultant damages, injuries, or bodily harm that might occur. Thank you.

​Our members who pick up swarms are benefited in 3 ways: 1) as a service to the public;  2) a chance to educate people on the value and behavior of honey bees; 3) as a way to increase their personal colonies. Each swarm is a value to us. We do not charge to travel to collect swarms. If any member attempts to charge for this service, please email us to immediately let us know. Thank you.

On this page, you'll find a directory for contacts and some useful information about honey bee swarming.

Swarming is a complex behavior of honey bees, which is not fully understood. There are many contributing factors that result in the swarming impulse of which congestion in the brood nest area is believed to be the primary cause. Other causes and contributing factors are believed to be a decrease in the queen's pheromone as well as an excess of pollen and nectar. Swarming occurs in colonies that are thriving and have a robust population. There are 2 kinds of swarms: primary and secondary or after-swarms.

Primary swarms consist of the old queen, drones, and about 50 to 60% of the workers from the originating colony, which contains the old queen, are larger than secondary or cast swarms, and tend to settle first on nearby branches before departing for new nest site.

After-swarms or 2ndary swarms are generally smaller than a primary swarm. They follow with a newly emerged virgin queen(s), depart a week or more after a primary swarm, may contain one or more virgin queens, and are more easily tempted into nearby bait hives.

Swarming involves a contingent of workers and a queen departing the original colony. The swarm typically gathers at a resting site, often in a tree, after leaving the colony. Scouts are sent to location a new location, such as in a log or other cavity. Once a suitable location is found, the swarm will relocate to the site and begin to nest.

An English proverb about swarms:

A swarm in May is worth a load of hay.

A swarm in June is worth a silver spoon.

A swarm in July ain’t worth a fly.

A German proverb -nearly the same as the English but with an additional line:

*The German version of the proverb came from  my beekeeper friend in Hamburg, GoPal K.S. Gaus, DoerKamp 4, 22527 Hamburg

April 2013. She introduced me to Hamburg's local beekeeping club.